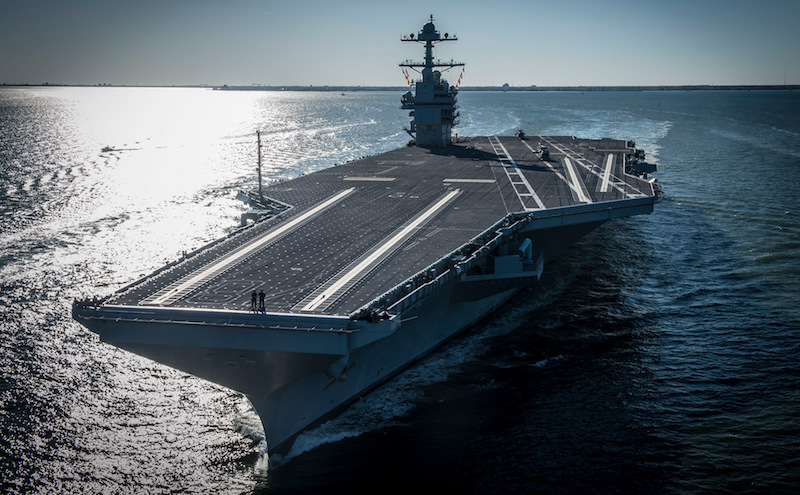 President Donald Trump has been consistent in his argument that the U.S. Navy has shrunk to a woefully inadequate size. The Republican has repeatedly said he wants the service to expand, including a fleet of a dozen aircraft carriers. That plan isn’t in the Pentagon’s current budget, but on July 22 the Navy will formally commission CVN-78, the USS Gerald R. Ford, its newest, most sophisticated nuclear-powered carrier.

The Ford, hit with delays and technical glitches, is expected to become operational in 2020. One question about its formal readiness, however, rests on whether the Navy will perform “full-ship shock trials,” a test in which the service detonates explosives nearby to demonstrate its fitness. Some in Congress—which has mandated a carrier fleet no smaller than 11—want to move the Ford into duty more quickly to reduce strain on the rest of the carrier fleet.

These massive mobile airports, which can cart as many as 90 aircraft simultaneously, are designed to project U.S. military and diplomatic power around the world. Earlier this month, for example, the Navy posted two carriers, the USS Carl Vinson and the USS Ronald Reagan, and their strike groups in the Sea of Japan for joint exercises with Japan’s Maritime Self-Defense Force as a precautionary signal to North Korean aggression.

The USS Gerald Ford is the first of four planned Ford-class carriers, the Navy’s first new carrier design in 42 years, although only three of them have names and funding. A shock trial would be deferred until the second carrier, CVN-79, the USS John F. Kennedy, arrives in 2020, according to defense funding language being pushed in the House seapower and projection forces subcommittee.

The Ford-class vessels are engineered to launch one-third more sorties per day than their predecessors, employing an array of technologies new to the flattop field, which dates to 1922 when the Navy launched its first aircraft from its first carrier, the USS Langley. The Navy’s oldest serving carrier, the USS Nimitz, entered service in 1975 and is scheduled for retirement by 2025 at the latest. The Navy plans to maintain its fleet of 11 carriers in coming years by using the new Ford-class carriers to replace retiring boats.

Beyond the question of how much field testing a new carrier needs, the military-industrial complex is likely to confront a more existential question in the coming decades: Is the aircraft carrier defensible, both physically and in budgetary terms? For the Navy, the future role of its carrier fleet is a critical issue. Do these vessels retain their central role in U.S. foreign power, or will Congress and military leaders find more appealing ways to deploy the immense budgets a carrier group requires?

At roughly $13 billion, the USS Gerald Ford is the Navy’s priciest ship and arrives with critical performance kinks that contractors are working to remedy by 2019. Two innovations that have thus far induced Navy headaches: an electric catapult launch system that replaces steam—a decision Trump derided in a magazine interview—and a landing system to arrest planes that saw its cost triple to $961 million, Bloomberg News reported. The catapult cannot yet launch an F/A-18 Super Hornet fully loaded with fuel, which limits the range and performance of the Navy’s workhorse fighter aircraft.

The Navy is spending $24.3 billion for the Ford and Kennedy, with another $17 billion expected for the third Ford-class carrier, the USS Enterprise. A General Accountability Office report this month blasted the service over costs on the Kennedy, which is about half finished. The report concluded that the cost estimate doesn’t address lessons learned from the performance of the lead ship.

When it comes to carrier deployments, the most immediate concern is the security of the more than 7,000 crew members who travel with a carrier strike group, an armada formulated to protect the ship and its aircraft as well as to serve as “a principal element of U.S. power projection capability,” as the Navy terms it.
But this formation is likely to face greater risks due to new missile technology in the coming years. China and Russia are both perfecting more sophisticated missile designs, and both are believed to be developing hypersonic glide vehicles (HGVs), weapons that travel faster than Mach 5, according to a Pentagon report obtained by Bloomberg News.

China already fields a ballistic missile, the Dong Feng-21D, which has been dubbed a “carrier killer” due to its 900-mile range and lethality. Over time, these types of weapons are likely to keep U.S. carriers farther from shore, which will require greater refueling capabilities for their aircraft complements.

For several years, the Pentagon has “admired the problem” of how long-range enemy missiles affect its carrier fleet but has avoided tough decisions about how to increase the fleets’ aircraft range and provide for more unmanned aircraft, said Paul Scharre, senior fellow and director of the technology and national security program at the Center for a New American Security (CNAS), a nonprofit think tank. Meanwhile, the Navy’s strike range from its carrier wings has actually dipped by 50 percent, below 500 miles, according to Jerry Hendrix, another CNAS analyst.

Last year, the they recommended scrapping the Ford-class carriers after the Kennedy’s completion and boosting the Navy’s offensive range with a greater reliance on unmanned aircraft, including a long-range attack platform. The Navy’s submarine fleet would also grow to 74, from 58, under the author’s recommendations, which reflected a 2 percent annual increase in Pentagon funding.

“One of the things we wanted to demonstrate is that you could reorient the force toward future threats,” said Scharre, a former Army Ranger who studies future warfare. More spending for unmanned platforms, from electronics jamming to surveillance and reconnaissance, would give pilots in F/A-18s as well as the newer F-35Cs more range and effectiveness. But because the Pentagon hasn’t developed unmanned platforms, “naval aviators ... are accepting a world where the carrier has less relevance in higher-end fights, against high-end adversaries,” Scharre said.

One example of the Navy’s muddled view on range, says Scharre, is the MQ-25 Stingray, an unmanned aerial refueling tanker, that’s considered a critical aspect of future carrier operations. The Stingray may be deployed as early as 2019 on two carriers. Yet the Navy hasn’t specified whether the MQ-25’s precise role would be as a mission tanker to accompany fighters on combat strikes, or merely as a recovery tanker loitering near carriers for pilots who miss approaches and are low on fuel, Scharre said.

Despite these strategic shortcomings, there’s still a political reality to wrestle with: The Navy’s largest ships remain politically untouchable. The carrier retains a mystique throughout the military and Congress; it’s an 1,100-foot giant that’s become a uniquely American symbol of dominating military power. Among the fixed-wing carrier-equipped nations, Italy has two, while Brazil, China, France, India, and Russia each field one. The United Kingdom is building two, including the HMS Queen Elizabeth, which commenced sea trials this week.

The newest Ford-class vessels have a service life of 50 years, but the Pentagon may find itself confronted more forcefully by China and Russia by the 2030s, according to a January 2017 report from the Center for Strategic and Budgetary Assessments (CSBA), a nonprofit think tank that advocates for a Navy reconfiguration.

“The capability and willingness of great powers such as China and Russia to challenge the status quo are increasing, and the U.S. will need to shift the focus of its military operations from maintaining security against these manageable threats to deterring aggression by highly capable adversaries,” according to the detailed report.

The Navy’s current size is also inadequate for the demands military leaders place upon it, with deployments growing longer and more frequent, according to the CSBA’s report. “For example, in 1998 only 4 percent of the Navy’s deployments were longer than six months; today all are.”

In this view of a more robust, reconfigured Navy, the carrier fleet will also need to evolve to assume new duties, from increasing their own logistics and refueling capabilities to extending their strike range to new surveillance and reconnaissance missions.

“It’s never good when we have any part of our military or force structure that is sacrosanct,” Scharre said. “We need to be willing to evaluate all the different components of our military force and our investments in an objective, analytical way.”