US sailors missing after Navy destroyer collision off Japan 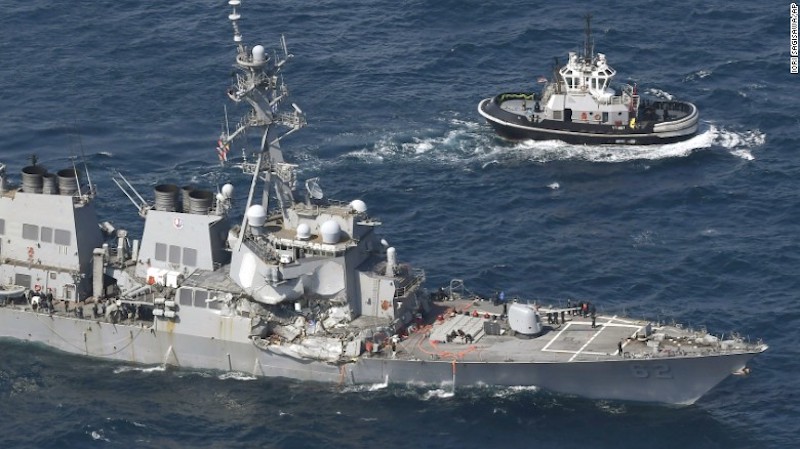 Seven US sailors are missing and the commanding officer of a US destroyer is among the injured after the warship collided with a merchant ship off the coast of Japan, the US Navy said.

The guided-missile destroyer USS Fitzgerald suffered severe damage to its starboard side.

"The collision affected Fitzgerald's forward starboard side above and below the water line, causing significant damage and associated flooding to two berthing spaces, a machinery space, and the radio room," according to a statement from US 7th Fleet.

The statement hinted that the missing sailors could be trapped in the damaged area of the destroyer. "It remains uncertain how long it will take to gain access to the spaces once the ship is pier side ... to methodically continue the search for the missing," the statement said.

The two ships collided about 2:30 a.m. local time Saturday in the Pacific Ocean about 56 nautical miles southwest from the port of Yokosuka and 12 miles off the Izu Peninsula, the Japanese coast guard said.

The USS Fitzgerald heads to Yokosuka, home base of the 7th Fleet, beside a US tugboat, off Shimoda, Japan on Saturday.

The Fitzgerald had left the US naval base in Yokosuka, where it is based, earlier Friday for routine operations in the area, a US Naval Forces Japan spokesman said.

The warship was towed back to Yokosuka, escorted by a Japanese coast guard ship, officials said.

Earlier, the ship's commander, Cmdr. Bryce Benson, was evacuated by a Japanese naval helicopter while US military copters evacuated two injured US sailors. All three are in stable condition at the US Naval Hospital in Yokosuka, said Cmdr. Ron Flanders, public affairs officer for US Naval Forces Japan.

The 7th Fleet said five Japanese Maritime Self Defense force ships were leading the search for the missing US sailors at the site of the collision, joined by another US warship, the guided-missile destroyer USS Dewey. US and Japanese aircraft were also involved.

Officials said the merchant vessel that collided with the Fitzgerald is the ACX Crystal, a container ship flagged in the Philippines.

The ship tracking website marinetraffic.com shows the ship had left the Japanese port of Nagoya on Friday evening. It was expected to dock at a Tokyo Bay port around 4:30 p.m. local time, officials said after the accident, adding the container ship was operating under charter to a Japanese shipping company.

The Japanese coast guard said the area of the collision, 12 miles (20 kilometers) off the tip of the Izu Peninsula, is known for its heavy maritime traffic.

About 400 to 500 ships pass through the area each day, the service said.

The last known fatal accident there was in September 2015, when a South Korean vessel and a Japanese container ship collided, Japan's coast guard reported. Six Japanese crew were declared dead in that incident.

The area has seen two other major collisions in the past five years, four in total.

Carl Schuster, former director of operations at the US Pacific Command's Joint Intelligence Center and a Hawaii Pacific University professor, said in a busy shipping lane the ships could have been in a "restricted navigation" situation, meaning they would have to observe strict rules for movement and positioning in relation to other vessels in their vicinity. Those rules leave vessels tight room to maneuver as turning away from one ship could put your vessel at risk of an even more serious incident with another, Schuster said.

The Fitzgerald is an Arleigh Burke-class guided-missile destroyer with a crew of approximately 330 sailors.

The ship, displacing 10,000 tons and 505 feet long, completed $21 million in upgrades and repairs in February and is forward-deployed to Yokosuka, supporting security and stability in the Indo-Asia-Pacific region, the service said.

Marinetraffic.com says the Crystal displaces 29,060 tons and is 741 feet long.

Schuster said the larger size of the container ship compared to the US destroyer left the smaller ship vulnerable in the collision.

The force of the impact could have thrown sailors overboard who were standing on the opposite side of the destroyer from where it was struck, he said. That could account for the missing sailors, who may have been on deck on watch or even just relaxing in the night air, he said.

Sailors could also been trapped in compartments below deck, Schuster said, pointing out that container ships have a bulbous bow below the water line, which could have plowed into the US warship.

According to a Navy news release from last month, Benson, the Fitzgerald's commander, was new to the position, taking command of the vessel May 13 after serving as the ship's executive officer, or second in command, since November 2015.

The Fitzgerald is the second command for Benson, a 1999 Naval ROTC graduate of Marquette University. He commanded the minesweeper USS Guardian, operating out of Sasebo, Japan, from 2008 to 2010, before taking shore assignments in Washington and with US Pacific Command.

The collision was the second in the region for US Navy warship in just over a month. On May 9, the guided-missile cruiser USS Lake Champlain was struck by a South Korean fishing boat off the Korean Peninsula.

No injuries were reported from that incident, which a Navy official said occurred when the fishing boat's crew did not have a radio to hear warnings from the US warship.

In late January, the guided-missile cruiser USS Antietam ran aground while anchoring near Yokosuka, damaging its propellers and discharging 1,100 gallons of hydraulic oil into the bay.