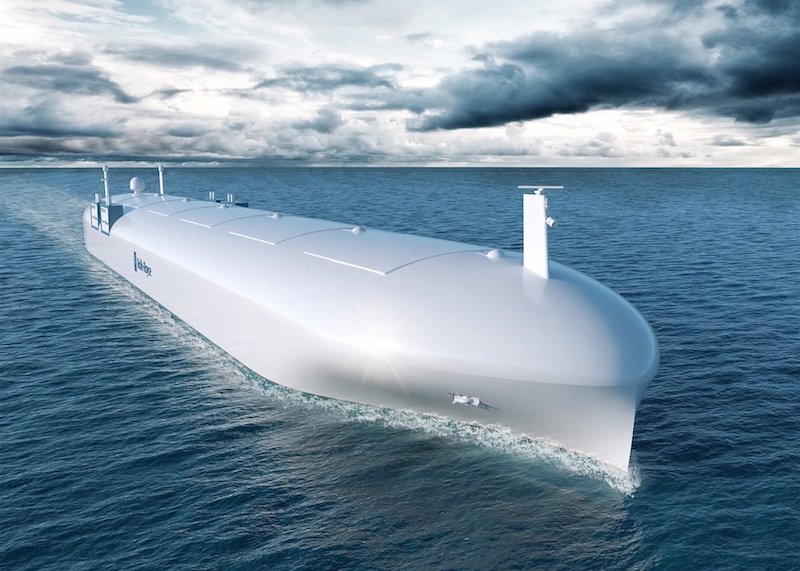 BHP Billiton Ltd., the world’s biggest mining company, is studying the introduction of giant, automated cargo ships to carry everything from iron ore to coal as part of a strategic shift that may disrupt the $334 billion global shipping industry.

“Safe and efficient autonomous vessels carrying BHP cargo, powered by BHP gas, is our vision for the future of dry bulk shipping,” Vice President, Freight Rashpal Bhatti, wrote in a posting on its website. The company, also one of the world’s largest dry bulk charterers, is seeking partners to work on technological changes in the sector, he said.

BHP, which charters about 1,500 voyages a year for around a quarter of a billion metric tons of iron ore, copper and coal, wants to deploy the technology within a decade, according to Bhatti. For the biggest miners, a move to crewless ships could deliver new savings in the $86 billion a year seaborne iron ore market, mirroring the shift to autonomous trucks to trains that allow fewer staff to remotely operate or monitor multiple vehicles.
Deploying unmanned ships on the 10-day sea journey from Australia’s northern coast to China would be a logical extension of technology that currently runs from mines to ports and allows producers to respond quickly to specific customer demands, Emilie Ditton, Sydney-based research director at IDC Energy Insights, said by phone.

“There has been in the last six months a really big change in the desire of mining companies to seek out opportunities for innovation,” Ditton said. “There’s a much bigger recognition that there are opportunities to innovate across the board.”

Work is underway at the International Maritime Organization, the United Nations agency in London that oversees global shipping, to consider regulation of autonomous surface ships, James Fanshawe, a former senior Royal Navy officer and chairman of the U.K.’s Maritime Autonomous Systems Regulatory Working Group, said by phone. A meeting beginning Wednesday of IMO’s maritime safety committee will consider proposals for a regulatory study on the “safe, secure and environmentally sound operation” of autonomous vessels, according to the organization’s website.

Market Reform
BHP takes the view that the dry bulk freight market is on the verge of pricing and liquidity reforms similar to those seen in bulk commodities markets over the last decade, Bhatti said in the May 30 posting. The company cut freight and transportation costs by 16 percent to $2.3 billion in fiscal 2016, according to filings.

The Baltic Dry Index, a measure of commodity shipping costs, fell 0.4 percent Tuesday to 818 points, according to the Baltic Exchange in London. BHP declined 0.6 percent to A$23.19 in Sydney trading Wednesday.

A three-year, 3.8 million euro ($4.3 million) project backed by the European Union developed a proposal for an intercontinental bulk carrier and concluded in 2015 that autonomous technology is both feasible and likely to be adopted. China’s Maritime Safety Administration is also working on development of uncrewed ships, according to its website.

Rio Tinto Group, which uses a fleet of about 76 driverless trucks and will fully deploy autonomous trains in Western Australia by the end of next year, sees shipping as among the next set of processes to target with innovation, its top iron ore executive Chris Salisbury told a Perth conference last month.

Rio’s marine unit shipped 281 million tonnes of cargo in 2016 and is the largest dry bulk shipping business in the world, operating 17 vessels of its own and contracting a fleet of about 200 at any one time, according to filings.

An unmanned ocean-going vessel could be in international waters by 2035 under proposals by Rolls-Royce Holdings Plc, which has developed a virtual prototype and aims to have remotely controlled coastal vessels in testing as soon as 2020, according to its marine division. Fertilizer producer Yara International ASA said last month it will deploy an autonomous-capable container ship on Norway’s coast from next year and aims to move to remote operation in 2019 and full autonomy a year later.

“Autonomous ships will change the way transport systems are designed and operated,” Ornulf Jan Rodseth, a Trondheim, Norway-based senior scientist at Sintef, Scandinavia’s biggest science and technology researcher, said in an e-mail. If freight users, including BHP, are able to adopt the technology, “you might see that they build a new fleet of special purpose ships that puts the traditional ships and ship operators out of business,” he said.