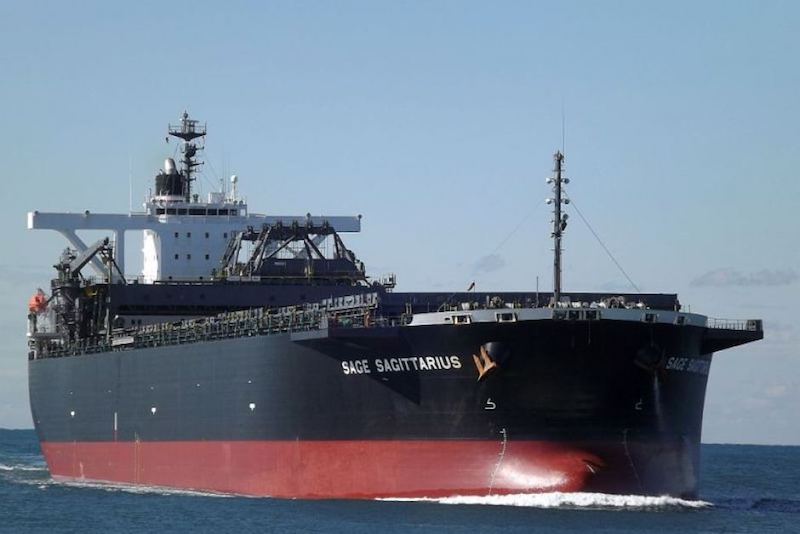 Two men who died on board one of the world's biggest coal ships in 2012 were victims of foul play, but there was no evidence the company was involved in their deaths or engaged in any cover up, a coroner has found.

The inquest, which started in 2015, looked into two of three deaths on board the coal ship Sage Sagittarius.

Filipino man Cesar Llanto, who was 42 and the ship's chief cook, disappeared overboard off the coast of Cairns in August, 2012.

Coroner, Sharon Freund said the experienced veteran was either thrown overboard or killed and his body later disposed of.
"His disappearance and suspected death has left a gaping hole in the lives of his wife and two children" Magistrate Freund said. "I am satisfied on the balance of probabilities that Mr Llanto died as a result of foul play by a person or persons on the vessel."

Two weeks later, chief engineer Hector Collado, 55, was killed when the ship was moored at the Port of Newcastle. Mr Collado who was second in charge, was found to have plummeted 12 metres down an engineering shaft.

"The injury that Mr Collado sustained before he fell over the handrail on the fourth deck is consistent with someone hitting him forcefully over the head, " Magistrate Freund said.

A third man, Kosaku Monji, a Japanese superintendent, was crushed to death in a conveyer belt as the Sage Sagittarius docked in October in Japan.

All three men disappeared or died within five weeks of each other.

Captain bullied and intimidated crew: Coroner
Nearly 11 hours of audio was found to be missing from a voyage data recorder (VDR) across the period Mr Llanto disappeared.

During the inquest, the ship's Captain Venancio Salas was questioned about whether he switched off the audio on the VDR on the day Mr Llanto went overboard.

"The omission of such data in my view is highly significant and suspicious," the coroner said. A report said that 50 minutes of audio recordings were also deliberately deleted on the 14th of September, the day Mr Collado was killed. "It would be an extraordinary coincidence if the person(s) who caused Mr Llanto's death were not also responsible for Mr Collado's death," the coroner said.

Magistrate Freund said the Captain ran the ship through bullying and intimidation,

The inquest heard Captain Salas, was involved in the purchase of guns and the trade of alcohol on board, and reportedly "had connections in the Philippine Navy."

She concluded the audio recordings from the ship were deliberately deleted by an unknown person.

Company should have reported deaths earlier
The inquest found the companies involved, Nippon Yusen Kaisha (NYK) or Hachiuma Steamship Co Ltd (HSC) were not complicit in the actions of crew or involved in any cover-up.

But Magistrate Fruend was critical of NYK for failing to tell Japanese authorities about the first two deaths when "there was every good reason to so inform them".

In a statement, NYK said it will examine the findings and that "the welfare of our ships crews is always of the utmost concern to us and we will continue to take all steps to provide a safe working environment".

The Coroner recommended Australian police, maritime and transport agencies form a permanent group to help investigate any deaths or disappearances from international ships bound for Australia. He said many problems identified in the landmark Ships of Shame Commonwealth Parliamentary report from nearly 20 years ago remain today.

Speaking outside the court Dean Summers, from the International Transport Workers' Federation, said not enough had been done to address the report's findings. "Half the recommendations ... haven't been enacted in Australia," he said "That needs to be done."

Mr Summers also criticised a "flag of convenience system" which allowed merchant ships to be registered in a country other than their own. Mr Summers said countries are "happy enough to prostitute their flag, their registration" to facilitate a "much lower set of standards in order to cut costs and evade tax" which resulted in a lawless environment.