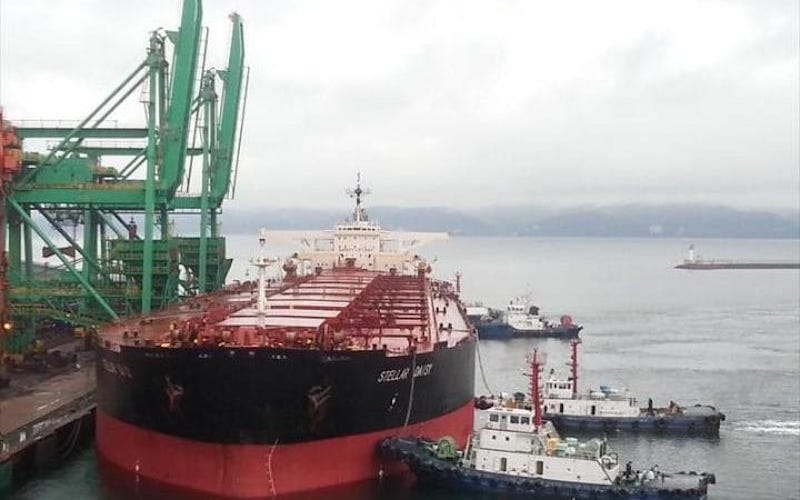 Stellar Daisy: The speed of sinking and the high loss of life mirrored tragedies related to liquefaction of cargoes. Six serious deficiencies were found in the vessel this February but it was allowed to sail without any detention

With 22 of the 24 crew members of the very large ore carrier STELLAR DAISY still missing, many in the shipping industry have been asking why the vessel reportedly split and sank after taking on water following a hull crack 2,000 miles off Uruguay. The investigation is expected to take a long time and is likely to be inconclusive, with the 1993-built vessel apparently lost in high seas on March 31 along with the 260,000 tonnes of iron ore it was carrying from Brazil to China. Shipowner and operator Polaris  Shipping declined to comment on possible causes at this stage. Vale, the reported cargo owner, has not replied to emails from Lloyd’s List.

However, even as the actual reason why this incident took place remained unclear, some insurance officials pointed out that the speed of sinking and the high loss of life mirrored casualties related to liquefaction of cargoes such as iron ore and nickel ore. With a high moisture content, iron ore has a propensity to liquefy during a voyage, which causes serious stability problems with a high possibility of capsizing. “Incidents due to liquefied cargoes can lead to serious perils, as the liquefied slush mounts quickly, brought on by vibrations and motions of the vessel, and the ships sink fast,” said a P&I club official. “The wet cargoes change their state from ore fines or mineral concentrate to a viscous fluid that can undermine the balance of the ship.” London P&I club says in its new guide on managing the risk of cargo liquefaction that the liquefied cargo can flow to one side in a roll in heavy seas, and that it would not return with the roll the other way, which progressively leads to the vessel capsizing. Consignments that are prone to liquefying have to undergo proper testing of moisture content before being loaded, a measure described under the International Maritime Solid Bulk Cargoes Code. The code as it stands would possibly prevent many incidents due to liquefaction if it is followed strictly, as it sets out a maximum moisture content of the cargo which is considered safe for carriage in ships, known as total moisture limit. The onus for these lab tests lies with the charterer, as it must provide the master of the vessel with written evidence that the moisture content does not exceed the TML. Upon the failure to provide such a certificate, the master should not load the cargo, said a Singapore-based vessel owner and operator. “But unfortunately, the results from these tests are sometimes modified and false figures for the moisture content are presented, which leads to emergencies,” he said. “However, the lab centres have an obligation to keep the sample of the cargo inspected by them for a period of two months,” he conceded, adding that in the case of Stellar Daisy this could provide essential evidence for an investigation.

Other theories
Stellar Daisy was originally built as a single-hull very large crude oil carrier at the Nagasaki Shipyard owned by Mitsubishi Heavy industries and was converted to a VLOC at the Cosco (Zhoushan) Shipyard in China in 2009. However, some insurance officials said conversion might not have caused the incident, as such a process would be carried out under class inspections. According to Korean Register, the ship had undergone an annual survey on August 12 last year Asked by Lloyd’s List whether the vessel had undergone a condition survey by a surveyor in the last three years, the Korean P&I Club, which has provided protection and indemnity cover to the VLOC, declined to comment. In February, the China Port State Control authorities identified six serious deficiencies related to watertight and weathertight doors, indicating potentially leaking hatches or doors. Yet the vessel was allowed to sail without any detentions.Some market participants also suggested there were other possible causes of the vessel sinking, such as its age, loading stress, or uneven loading that can have structural effects on vessels which can cause damage to the frames and cause a hull failure.