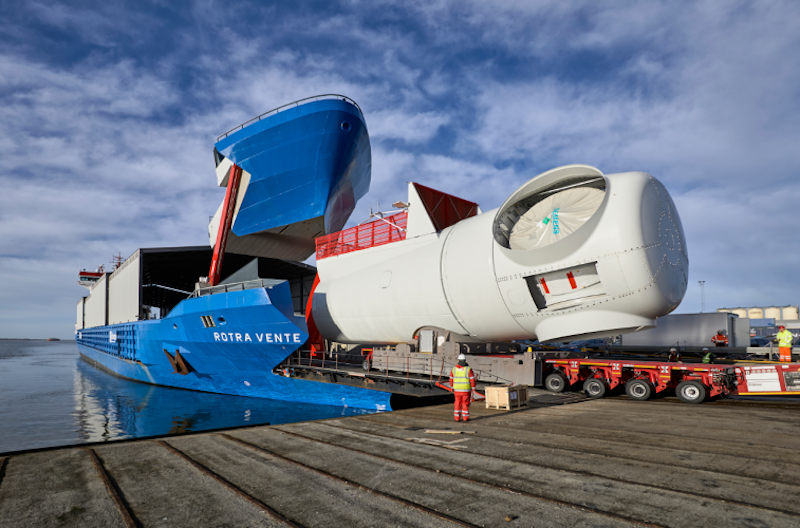 The 141-metre long Rotra Vente, designed by Deugro Denmark, will be used to transport wind turbine components such as blades and nacelles from Siemens Wind Power’s manufacturing facilities in Hull, UK, and Cuxhaven, Germany, to Esbjerg and other installation ports and harbors in the North and Baltic Seas.

Designed from a base of an existing hull of a container ship, the vessel was rebuilt for its new purpose at Holland Shipyard in Hardinxveld-Giessendam in the Netherlands.

Part of its new equipment is a large bow door that allows RoRo access to the restructured cargo deck. The deck is covered by a telescopic roof to protect the nacelles from salty seawater spray during transportation. Since the roof can be opened, Rotra Vente’s cargo can also be loaded via cranes at harbors without a RoRo ramp.

Rotra Vente’s sister ship, a transporter for towers and blades, is already under construction.

This vessel, the Rotra Mare, is expected to be completed in the first quarter of 2017. She will accommodate up to 12 wind turbine rotor blades and transport them from Siemens’ production facilities in Hull, England or Aalborg, Denmark to the respective installation harbor.