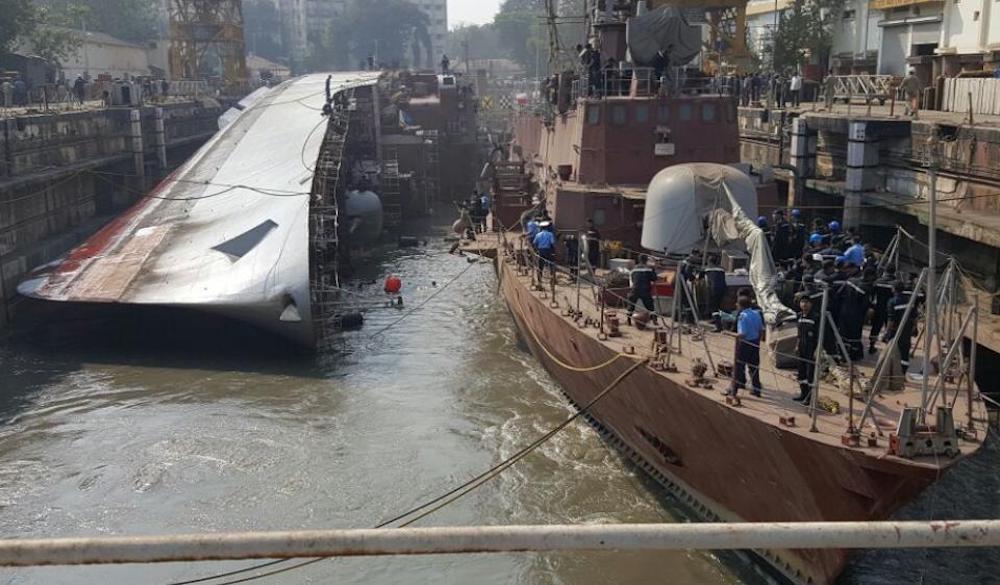 In a major accident the day after Navy Day celebrations, two sailors died and 14 others were injured when a guided missile frigate, INS Betwa, tipped over and hit the ground while being undocked at the Naval Dockyard in south Mumbai at around 1.50 pm Monday.
According to a Navy spokesperson, the likely cause of the accident was a failure of the block mechanism that is used to dock and undock ships.

The accident, described by officials as a “first of its kind” in India, left the frigate lying on its side on the ground. Sources said the main mast, which houses the long-range surveillance radars, was broken and that the boilers and other equipment inside the ship may have been damaged.

The Navy has ordered an inquiry to fix responsibility and ascertain the extent of damage. Chief of Naval Staff, Admiral Sunil Lamba, arrived in Mumbai Monday night to assess the situation.

Sources described the accident as “unfortunate” and “a blemish” on the Navy’s record. They said Indian naval dockyards had recently undertaken a similar exercise with a much heavier aircraft carrier, INS Vikramaditya.

INS Betwa is one of the three Brahmaputra class 3,800-tonne guided missile frigates in service with the Navy, and was commissioned in 2004. It had gone for a medium-refit to the Mumbai dockyard in October and was to set out to sea later.

Sources said the accident occurred when the vessel was being set into water and the dock was flooded to keep the ship afloat. That was when the dock blocks either broke or slipped, said sources.

The latest incident caps a series of mishaps over the last three years in the Western Naval Command, including the one involving the INS Sindhurakshak in which 18 people, including three officers, were killed in 2013.

”This is a freak accident as the breaking of dock blocks is uncommon. Undocking of a ship is a very critical phase… in the case of INS Betwa, the block that broke or slipped is beneath the ship,” said a senior official.

”The ship is currently lying on its side and we are not disturbing it to ensure there is no further damage. Once the technical assessment team evaluates its condition, the process of ‘righting of the ship’ will commence,” said another official.

The bodies of the two dead, who were earlier reported missing, were found by Navy divers late in the evening. They were identified as Asutosh Pande from Madhya Pradesh and Niraj Rai from Maharashtra, both mechanical engineers. While one died due to drowning, the other was killed after suffering multiple fractures caused by the fall.

Sources said that of the 14 injured, three were undergoing treatment in ICU with multiple fractures. “When the ship titled, the crew fell off the ship and sustained multiple fractures. They are being treated at the naval hospital INHS Asvini,” said the Navy in a press release.

INS Betwa, named after the river in Madhya Pradesh, had participated in Operation Sukoon to evacuate stranded Indians from Lebanon to Cyprus in 2006.