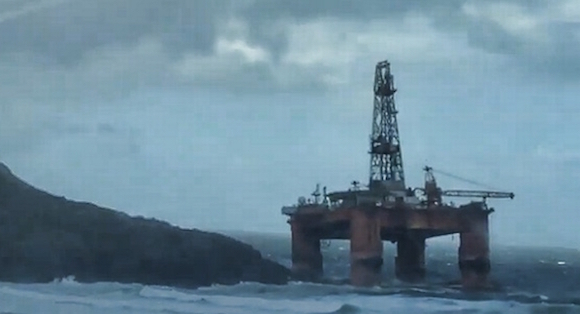 Drilling rig Transocean Winner has run aground on the Isle of Lewis off Scotland after a towline attached to a tugboat became detached in heavy weather conditions.

The semi-submersible unit was being towed by anchor-handling tug supply vessel Alp Forward overnight on Sunday when it ran into stormy seas west of Lewis, according to the Maritime & Coastguard Agency (MCA).

The agency’s emergency towing vessel Herakles was deployed to assist but the towline was reported by the tug’s captain to have become disconnected at 4:20am on Monday.

Reconnection of the line was not possible due to rough seas and “the rig is at the risk of grounding” on the island, the MCA stated.

However, it added: “There are no personnel onboard and there is no risk to life.”

The MCA stated Dutch contractor SMIT Salvage, which provides assistance to vessels in distress, has now been mobilised to handle the incident.

A Transocean spokeswoman subsequently confirmed to Upstream the rig had now run aground on the west of Lewis and that the contractor was "working closely with the local authorities and other organisations to resolve the situation".

The 17,000-tonne rig ran aground at Dalmore near the village of Carloway, UK publication Daily Record reported.