The salvage operation on the heavily grounded bulk carrier MV Benita, which ran into trouble on June 17 when it hit the coast of Mauritius, has entered the second phase and preparations for the refloating of the ship are underway.

The Greek company Five Oceans Salvage is exploring the possibility of using explosives on the rocks underneath the vessel as part of the salvage efforts. 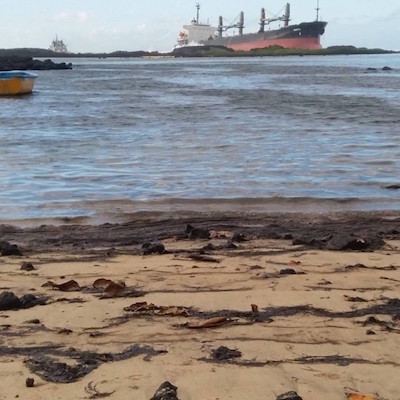 Furthermore, the operation to remove the 145 tonnes of fuel oil on board “is making good progress,” according to Five Oceans Salvage, with all the oil being moved ashore by helicopter.

The lubrication oil, stored is drums in the engine room is also being removed from the vessel.

No further oil residue or pollution has been observed around the 1998-built ship and specialised anti-pollution booms remain in place along the surrounding shoreline.
According to the salvors, MV Benita remains aground in a stable condition with a number of tanks flooded. The deck and side plates of the vessel do not appear to be showing signs of stress.

The salvage team managed to relocate within the engine room and preserve and repair in situ one of the starting air compressors of the vessel that had previously been flooded, filled up the air receivers and started one of the auxiliary engines, restoring auxiliary power onboard the ship.

The salvage company said that the vessel’s cranes and windlasses are now operational, while a team of 25 welders, fitters and assistants working onboard are preparing the double bottom tanks and cargo holds for pressurization for the refloating attempt.

The 44,183 dwt bulker ran aground in the morning hours of June 17 as a result of a fight which broke out between the vessel’s crewmembers the night before.
At the time of the incident, the Liberian-flagged ship, crewed by 23 seafarers, was on its way from the Indian port of Paradip to the port of Durban, South Africa.