A long-term decline in the level of British-flagged merchant ships has been halted as the authorities take on board concerns about issues linked with flying the Red Ensign.

Figures from the Department of Transport show that in 2015 there was an 8pc increase in the size of the UK-registered trading fleet to 13.7m deadweight tonnes.

The data – which covers ships weighing more than 100 tonnes – revealed an end to four years of decline, with ship operators less likely to register their vessels under so-called “flags of convenience” which have less demanding regulation. 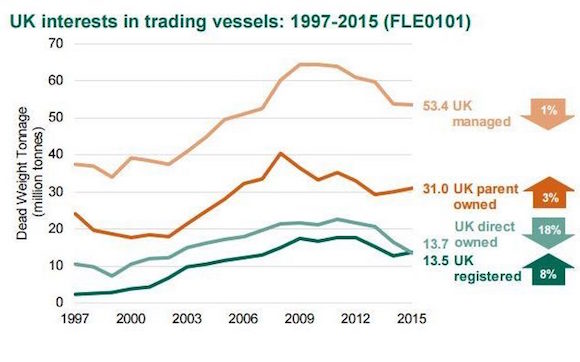 Guy Platten, chief executive of the UK Chamber of Shipping, welcomed the increase saying it reflected government’s recognition of the importance of the shipping industry and moves to reform Britain’s shipping register and Maritime and Coastguard Agency (MCA) to make it serve shipowners better.

Both the register and MCA have come in for criticism previously for failing to meet shipowners’ needs, such as quickly carrying out surveys so ships can get under way or promptly responding to queries.

“Reforming the MCA and the register must be pursued quickly and ambitiously in order to ensure that the UK flag is a competitive and commercially attractive register for the global industry,” said Mr Platten, but he warned that if the programme founders, Britain “risks losing further ground to our global maritime competitors”.

While the increase in UK-registered ships is positive, the chamber said that Britain is still lagging behind many other countries, with the size of the global fleet having risen by 5pc a year since 2010, while the number British-flagged ships has declined by 3pc over the same measure.

Mr Platten added: “That the UK share of the global fleet has fallen significantly at a time when global tonnage has increased demonstrates the urgent need for these reforms. If we are to reach the government’s own target of 2pc of world shipping tonnage there remains a long way to go.”

While flying the Red Ensign is sign of a well maintained vessel and carries a great deal of prestige on the high seas, as well as offering global protection from the Royal Naval and support from Britain’s consular services, the UK’s position as a maritime nation has been eroding for decades.

At the end of 2015, Britain had the world’s 19th largest trading fleet, accounting for just 0.8pc of merchant ships. The largest fleets were the flag of convenience nations Panama, with 19pc, Liberia, at 12pc, and the Marshall Islands at 10pc. Behind them were Hong Kong at 10pc and Singapore with 7pc.

Despite this, the UK remains a major maritime centre – dealing in ship chartering, insurance and law, as well as actual vessels – and the industry is estimated to be worth £10bn a year to the British economy and supports 240,000 jobs.

Although the tonnage of ships registered in the UK is rising, other worrying trends were highlighted by the data. Ships directly owned by UK businesses continued their steady decline, down 18pc in 2015 to 13.7m tonnes, and UK-managed ships also edged back 1pc to 53.4m tonnes, with the drop far less marked than in previous years.