Is it Your Turn or Mine?

It was dark with about 4 miles visibility. A container vessel was on passage. The OOW was accompanied on the bridge by an officer of a different nationality undergoing familiarisation. The OOW decided to alter course to starboard to pass a group of fishing vessels on the port bow. This resulted in a risk of collision with a bulk carrier, which was crossing the container vessel from port to starboard

After passing the group of fishing vessels, the container vessel’s OOW altered back on to the planned course. The bulk carrier’s OOW, assuming that the container vessel had altered course in response to his request, now also altered course to port with the aim of creating more sea room for the passing manoeuvre. However, this resulted in a continued risk of collision.

Although the bulk carrier’s OOW had also altered course to starboard, the avoiding action taken on both vessels was insufficient and taken too late to prevent them from colliding.

There were no resulting injures. However, both vessels sustained serious damage, and about 600 tonnes of heavy fuel oil were spilled 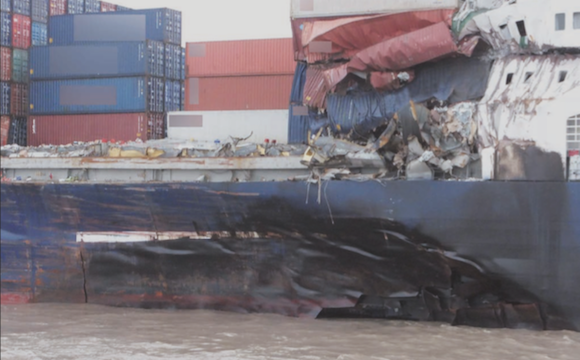 2.      Following the initial VHF radio communication, the OOW of each vessel was left with different expectations. A significant contributing factor to this misunderstanding was that the conversation on the VHF had been conducted in a language that the container vessel’s OOW did not understand. Furthermore, his accompanying officer’s translation of the conversation was incomplete and did not include what he had tacitly agreed to.

3.      By inviting his accompanying officer to communicate on VHF radio on his behalf, the container vessel’s OOW unnecessarily put himself in a position of having to deal with the consequences of those communications, which he did not understand and was unable to control.

4.    The International Chamber of Shipping’s Bridge Procedures Guide recommends against using VHF radio for collision avoidance and warns that, even where vessels have identifed each other, misunderstandings may still arise. In this case, the resulting misunderstandings were not only between the vessels concerned, but also between those on the bridge of the same vessel.

5.    The use of VHF radio for collision avoidance was unnecessary, was contrary to internationally recognised best practice, and was a signi cant contributing factor to this accident.