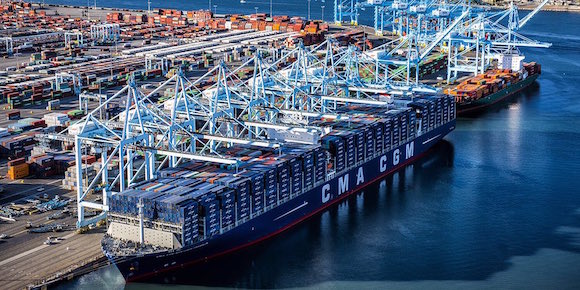 Shipping lines may appreciate cost savings from so-called mega-ships, but for those who sail them, bigger ships can mean bigger risks.

That $1 billion loss would far outstrip the $300 million to $400 million in claims that followed the sinking of the 8,000-twenty-foot-equivalent container ship MOL Comfort in 2013.

“We’d have to rewrite the law of general average” if one of the new mega-ships was lost, Kinsey said, referring to rules that determine how cargo losses are divided among claimants.

Captain Michael Lloyd, a retired British naval and merchant ship commander, said the length and size of the newest container ships, combined with rougher weather at sea, makes catastrophic accidents such as the loss of the MOL Comfort in 2013 increasingly likely.

“We’ve never before had ships just snapping in half, but as the weather deteriorates, we’re going to see more of it,” Lloyd said during a panel discussion on mega-vessels and risk. Lloyd, who spent more than 50 years at sea and commanded containerships for 10 years, referred to predictions of increased hurricanes and storms caused by global climate change.

He also said wave action puts more stress on longer ships, especially around the midsection. “One of the big problems now is poor build quality and bad design,” Lloyd said. Faulty welds lead to cracking that is exacerbated, he said, as longer ships “bend” in waves.

Lloyd and Kinsey offered a seaman’s view of the problems associated with larger ships just as those ships begin calling on U.S. ports, putting greater strain on landside operations. The 18,000-TEU CMA CGM Benjamin Franklin became the largest container ship to call in the U.S. when it docked in Los Angeles late last year. The French ship is 1,310 feet long.

The U.S. West Coast is preparing for regular calls by some of the largest container ships in service globally. Container ship lines have invested heavily in “ultra-long container vessels” or ULCVs with capacities of up to 20,000 TEUs, pursuing economies of scale.

But mega-ships aren’t stemming shipping industry losses, forecast to be as high as $5 billion this year. Low oil prices and slow demand growth make it unlikely the larger ships will pay for themselves anytime soon, Rolf Habben Jansen, Hapag-Lloyd CEO, said at TPM.

Kinsey and Lloyd took the discussion of mega-ships past productivity and profits to safety and protection of lives at sea. Seafaring remains one of the most dangerous jobs in the world, Lloyd said. “We lose about 2,500 seamen a year. It’s more dangerous than mining.”

Finding crew and officers is increasingly difficult, he said. “A container ship is not a popular ship to sail on,” Lloyd said. “It rattles, it rolls, and it is totally and utterly monotonous.” In the U.S., many ports that worry about unloading containers won’t allow seamen to leave ships, he said.

Both former captains urged enforcement of the new container weight provisions of the Safety of Life at Sea convention, by far the most controversial topic at the conference. Those provisions would make shippers responsible for providing verified container weights to carriers.

“Make sure it’s implemented, because it’s critical to the safety of the vessel,” Kinsey said. “If we start putting containers on that are heavier than declared, our stability calculations are useless and we do not know the stresses that are going on that ship,” said Lloyd.
“As the (ship’s) master, I had to do a deadweight survey (of the vessel) and compare it to the manifest, and they never matched up,” Kinsey said. “When you’re dealing with a 3,000-TEU vessel that’s one thing, but if you’re dealing with an 18,000-TEU vessel, it’s a no-win scenario.”

Just as critical but not addressed by SOLAS is ensuring containers actually contain what shipping documents say they carry. Lloyd once had a ship’s hold fill with hazardous fumes after a container carrying undeclared hazardous materials leaked while at sea.

Kinsey and Lloyd had some advice for shippers, in addition to accurately declaring weights and cargo. “Know where your cargo is, and know who’s carrying it,” Kinsey said. “If it’s critical cargo, don’t put it all on one vessel. Look at options and break the shipment it up.”

He urged cooperation among maritime stakeholders on shipping issues that ultimately affect seafarers’ safety at sea.

“We traditionally have been an industry that learns from our mistakes,” Kinsey said. “We need to be more proactive and address these issues before they happen.”