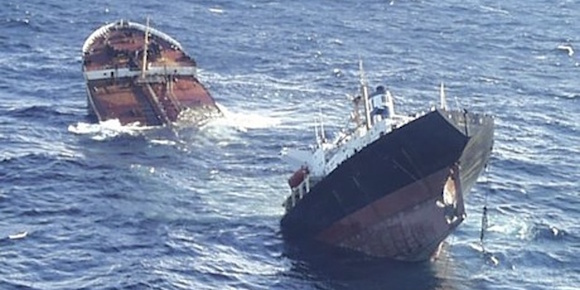 Spain's Supreme Court said on Tuesday it had found the captain, the British insurer and the owner of the Prestige tanker that sank in 2002 liable for a devastating oil spill, one of Europe's worst environmental disasters.

Six days later, damaged and adrift, it broke in two and sank off the coast of Galicia.

The accident saw 63,000 tonnes of oil spill into the sea and blacken 2,980 kilometres (1,852 miles) of shoreline in Spain, France and Portugal with sludge.

The spill caused huge damage to wildlife and the environment, as well as to the region's fishing industry, polluting more than a thousand beaches and leading to an international cleanup effort.

A Spanish court in 2013 acquitted Mangouras and the ship's chief engineer, both of them Greek, as well as a senior Spanish official, of environmental crimes over the wreck, arguing they did not act intentionally or with serious negligence.

But the Supreme Court revoked the acquittal for Mangouras, accusing him of "gross negligence" for having sailed at a time when bad weather was possible, knowing that the ship was old and that the automatic pilot no longer worked, for instance.

The London P&I Club, meanwhile, could be liable for up to $1 billion (€920 million), though no sum has yet been decided.

The 2013 acquittal of the captain had caused an uproar.

Greenpeace had said that the decision provided "a carte blanche to the oil industry to threaten the environment and citizens".

And Spain's State Prosecutor Luis Navajas, who asked the Supreme Court to overturn the acquittal in September, called the decision "flawed" and "notoriously wrong."

"The prestige of Spain as a state that defends its coasts and its economic wealth was called into question by this decision," he argued.

Among the evidence he said had been overlooked were notes from the Prestige's former captain, Stratos Kostazos, who had complained that the tanker was in bad shape and who had refused to sail in it.

The Supreme Court said on Tuesday that two major energy companies - Spain's Repsol and Britain's BP - had advised against using the Prestige tanker, a 26-year-old vessel with a carrying capacity of 81,000 tonnes.

Mangouras' seamanship was not only dangerous, "he also created a serious risk, particularly with regards to the highly-polluting nature of the substance he was transporting," it concluded.