Two vessels were about to meet at the end of a buoyed channel. Visibility was reduced by fog to about 100 metres. Vessel A had a pilot on board and the pilot boat was secured on the port side ready to board the relief pilot. The vessel was making way at near nine knots in order to match the speed of the pilot boat and was sounding the prescribed fog signal. Vessel B was approaching from the south and had to enter the channel obliquely due to a lighthouse on its port side. The speed was between 11 and 12 knots and the plan was to swing to starboard after passing the red buoy and to keep the speed in order to counter the two knot northeasterly current. Vessel B was not sounding the prescribed fog signal for reduced visibility.

The bridge teams on both ships were aware of the other ship and both had planned to meet in the channel, which was 300 metres wide, near the buoys. The bridge team members on vessel A were under the impression they were close to the western side of the channel, but in reality they were near the middle. The bridge team members on vessel B were under the impression they were turning as planned and were near the eastern side of the channel. In reality, the turn brought them to the middle of the channel, which was not the plan. Within 45 seconds the situation went from one which both bridge teams perceived as normal to one that was far from being normal. The vessels collided near the middle of the channel and sustained substantial damage.
Lessons learned  - Both bridge teams lacked adequate situational awareness. Each thought their position was appropriate for the meeting but in fact, neither was.  - Meeting in a narrow channel can be a challenge for bridge teams, especially when visibility is reduced. In this instance, factors such as a closing speed of nearly 20 knots, a pilot boat tied onto one ship and the other vessel making a turn all combined to make an unacceptably small margin for error. 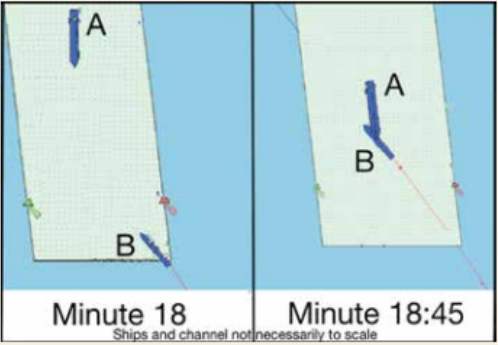 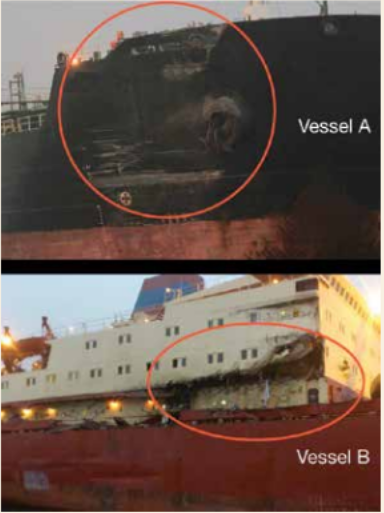