Beached instead of berthed

The Nautical Institute has issued Mars Report to focus on lessons learned from an accident in which the tanker when arrived in port went beached instead of berthed.

The tanker arrived in port and was to go to berth at the southern extremity of the port. The manoeuvre required swinging the vessel 180 degrees and then backing astern to berth port- side to. Another tanker was moored just to the north of the intended berth which restricted the manoeuvring room somewhat. The berthing plan was discussed between the pilot and the Master but the pilot had not mentioned the restricted room due to the other berthed tanker. Although there was a flood tide and the westerly wind was blowing at 15 knots, a tug was not considered necessary.Once turned successfully, the pilot began backing the vessel; running astern with main engine and bow thruster, the wind and the flooding tide were slightly on the vessel’s port side. 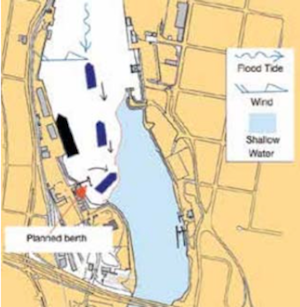 -The angle of approach to the berth was more open than ‘usual’ due to another tanker alongside the adjacent berth. This placed the vessel in a more vulnerable position, especially considering the effect of the wind and current.

– When manoeuvring a vessel in a confined waterway where the margin for error is small, a tug is always a good investment.