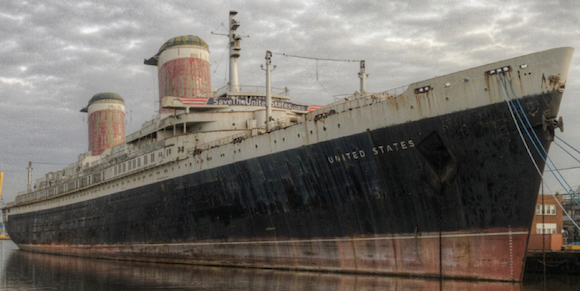 One of the greatest ocean liners ever launched by the United States could still make its way to Brooklyn. Last-minute donations totaling more than $600,000 mean that the SS United States won't have to be sold for scrap, at least for the time being, the New York Times reports. The vessel, which set a trans-Atlantic speed record that still stands today, has been docked on the Delaware River in Philadelphia, but needs $60,000 a month to stay there and would have run out of funds by the end of October.

Now it can stay in where it is "well into next year," said the SS United States Conservancy's Susan Gibbs, granddaughter of the ship's late designer.

Developer John Quadrozzi, Jr. has proposed bringing the ship to Red Hook's Gowanus Bay Terminal and turning it into a mixed-use facility, including offices and a maritime school. Quadrozzi, who owns the terminal, is willing to keep the ship there rent-free, but there are still the costs of moving it and converting it: $2 million and anywhere from $50 million to $200 million, respectively. "I can't say enough how exciting it would be to be a part of getting this ship sited in this area of Red Hook," Quadrozzi told the Brooklyn Paper.