DDG-1000 Zumwalt gets ready for sea 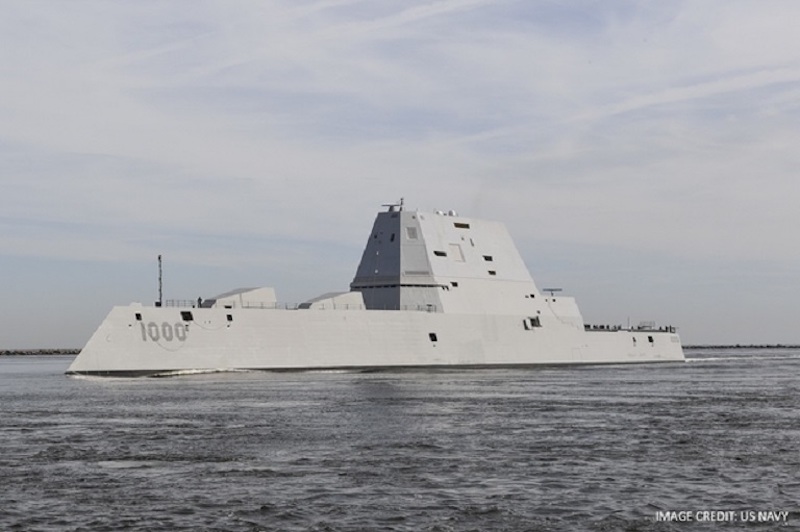 DDG-1000 Zumwalt, the US Navy's first 21st Century "destroyer", with a displacement of nearly 15,000 tonnes and a stealth signature equivalent to that of a fishing vessel, is tipped to go to sea for builders trials within a month, according to Defense News.

The striking design, which features a 'tumblehome' hull optimised for stealth, comes with a new propulsion and power distribution system, an integrated software environment linking practically all of the ship's systems, and caters for a reduced crew of about 140.

Only three of the class will be built, with plans for a third flight of Arleigh Burke DDGs already in train. The Zumwalt was laid down at the Bath Iron Works shipyard of General Dynamics in Maine in November 2011 and was launched in October 2013. Commissioning is now expected to be in 2016, with IOC expected some time after that.

In an interview with Defense News, Sean Stackley, the US Navy’s top official for research, acquisition and development, said: "We’ve got a builder’s sea trial with a notional start of the 7th of December”.

Stackley also said that, as planned, the Zumwalt will not be complete and ready for operations when it leaves Bath next year for its home port of San Diego. While nearly all of the ship’s hull, mechanical and electrical systems will be installed in Maine, most of the mission systems, including combat systems, radars and other sensors, will be completed in California.

“This two-phased delivery approach has been in place since the contract was first struck,” he said.
Funding for the Zumwalt is essentially complete, according to Stackley, including US$433 million requested in the yet-to-be-finalised 2016 budget to continue work on the ship.

Believe it or not – Zumwalt's first Commanding Officer goes by the name Captain James Kirk.