The ShoreTension mooring system in place with the line fed from the orange hydraulic unit on the wharf. The ship is secured with another unit used at the stern.

An incident in which a ship broke its moorings and hit an oil jetty in Rotterdam resulted in the development of new mooring technology now in use in Fremantle.

ShoreTension, developed by Netherlands company K.R.V.E. with the Port Authority of Rotterdam, is a shore-based flexible mooring system that puts mooring lines under constant tension. For moored vessels, it reduces movement caused by strong wind, currents or passing vessels.

Two units are required per ship. We now have six, with six more units arriving before the end of the year.

The system will be used on some container ships and on ships at North Quay Berths 11 and 12. These eastern berths are closest to the bridge and where ships are most exposed to northerly winds. 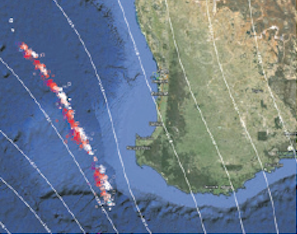 Two K.R.V.E. employees spent three weeks in Fremantle training our staff on ShoreTension and it has been integrated into our mooring procedures.

Port Services Officer Ian Fryer said ShoreTension was “absolutely fantastic” from a user’s perspective: “The ShoreTension system has a 60-tonne pressure capability but we will probably only need 24 tonnes.” “It provides a notification system to Inner Harbour team leaders, the North Quay patrol, the security centre, the Harbour Master and the signal station.

In addition, ShoreTension will provide us with useful data, such as how much impact there is from suction and pressure waves from passing vessels.”