New laws to wipe out 93% of Australian coastal seafaring jobs

A submission to the inquiry into Shipping Legislation Amendment Bill 2015 by The Australia Institute commissioned by the Maritime Union of Australia (MUA) assesses the Regulatory Impact Statement and a related Cost Benefit Analysis of the Bill.

The submission found technical shortcomings within the Cost-Benefit-Analysis:

•    It fails to appropriately set the scope of the assessment – in other words, whose costs and benefits count. It appears to include millions  in benefits to foreign-owned companies, with little consideration of Australian workers.

•    It adopts an unorthodox approach to the value of labour, without adequate justification, or quantification of losses to seafarers. While the methodology is unclear, there appears to be an unstated $74 million present value loss to Australian seafarers in the CBA.

•    It is based on very high exchange rates of AUD0.90 and 1.00 to the US dollar. This overstates the benefits of the reform to users of shipping by up to 35 per cent.

What little benefit that is generated will accrue largely to foreign owned shipping and bulk freight using companies.

“Our submission identified major issues, including a narrow-scoped cost-benefit analysis, inaccurate Australian Dollar value and unorthodox approach to the value of labour.”

“The economic reality of Australia’s coastal shipping industry is that it must compete with both heavily subsidised land freight options and international shipping that can use foreign labour while in Australian waters. The free-market ideology behind this bill simply ignores that reality.

“If an Australian coastal shipping industry is to survive, it needs policy support as is found in many other countries,” Campbell said. 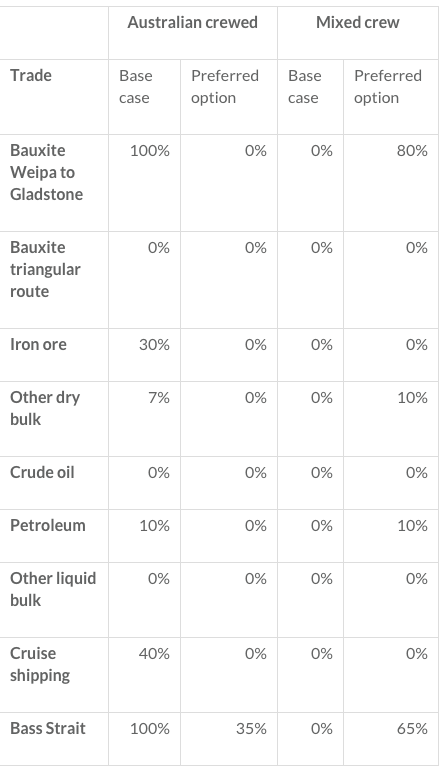