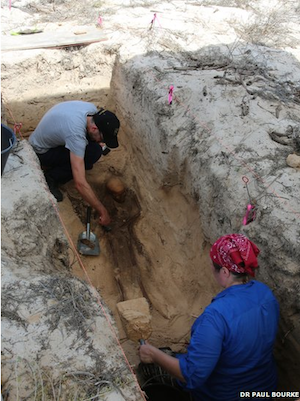 The skeleton of a victim from one of Australia's most famous shipwrecks has been unearthed by archaeologists.

The remains on Beacon Island, off Western Australia, date from the wreck of the Dutch East India ship the Batavia in 1629.

In the aftermath of the disaster, more than 100 survivors were murdered by a group of mutineers.

Maritime experts hope the latest find will shed new light on the episode.

But Dr Daniel Franklin, of The University of Western Australia Centre for Forensic Science, said this was the first skeleton to be found undisturbed on Beacon Island through archaeological investigations. He said it "represents a unique opportunity to reconstruct events surrounding this individual's death and internment".

Jeremy Green, head of maritime archaeology at the Western Australian Museum, said they hoped to learn more about about the life of sailors on board Dutch East India Company ships. "It is as much about knowing where the people came from, what their diet was, as well as how they died," he said.

The skeleton is of an adolescent and two musket balls were reported to have been found nearby.

The Batavia had sailed from the Netherlands to the Dutch East Indies but veered off course and was shipwrecked in the Abrolhos Islands.

Of about 340 people on board, most made it to nearby Beacon Island and the ship's captain set off in a longboat to find help.

A bloody mutiny then broke out among those left behind led by a merchant Jeronimus Cornelisz, and his group began killing off the survivors.

Women and children were among those murdered and several women were kept as sex slaves.

Cornelisz was later found guilty of mutiny and executed along with several of his henchmen.

The fate of the Batavia and its passengers and crew has been the subject of books, documentaries and even an opera.