A cargo ship carrying millions of pounds worth of cars which has been stranded in the Solent for 19 days has arrived in port.

The Hoegh Osaka was towed to Southampton Water Berth 101 by four tugs from a point between East Cowes and Lee-on-the-Solent.

It took roughly three hours to tow the ship in.

The vessel was run aground on Bramble Bank on 3 January after developing a list while on the way to Germany.

More than 3,000 tonnes of water, which entered when an item of cargo punctured a hole in the side, was pumped out of the ship.

With the water removed the salvage team from Svitzer was able to right the ship. 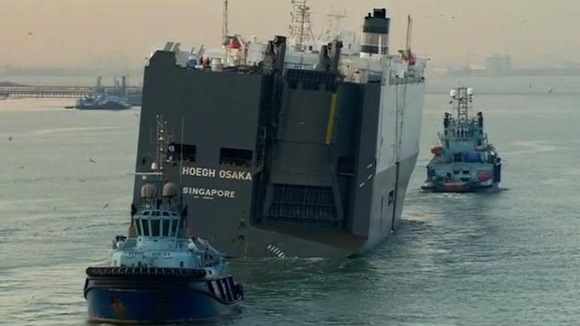 The 51,000-tonnes vessel originally had a list of 52 degrees, but this was reduced to five degrees before it was towed.

More than 1,400 cars and 105 pieces of construction equipment are on board and many are under water.

It is thought the cargo could be worth as much as £60m.

The ship will remain docked in Southampton while salvors handover responsibility of the ship to Norwegian owners Hoegh Autoliners.

An investigation by the Marine Accident Investigation Branch is to get under way now the ship is back in port.

The vessel floated free from the Bramble Bank sandbank on the high tide on 7 January and has since been anchored and held in position by tugs in deep water at Alpha Anchorage, near Lee-on-the-Solent.

It has become a tourist attraction for areas along the coast and Mandy Jewell, who runs the Bluebird Cafe in Lee-on-the-Solent, said it had "doubled" trade.
She said: "It has been brilliant. It has doubled trade, we have been packed every day since it happened "We would love it to stay. People have come from miles around to see it so I am hoping they will come back."

Salvage company Svitzer will be paid in accordance with the condition of the ship and the cargo, but the final amount will be determined by an arbitrator.

Lief Hoegh, of Hoegh Autoliners which owns the ship, said: "There were no serious injuries to people or to the surrounding area so seeing the ship being moved back in to port was the outcome we had hoped for when the incident happened."