Nicaragua has announced the start of work on a new canal linking the Atlantic and Pacific Oceans.

At an opening ceremony, Wang Jing, the president of HKND, the Chinese company building the canal, said this moment would go down in history.

The 278km (172 mile) waterway will be longer, deeper and wider than the Panama Canal.

But critics fear a negative environmental impact and doubt its viability and economic benefits.

The Grand Canal of Nicaragua, as it has been called, aims to rival Panama's waterway and lift the country out of poverty.

The opening ceremony was largely symbolic, as work began on an access road for machinery needed to build a port for the canal on Nicaragua's Pacific coast.

Nicaragua's Vice-President Omar Halleslevens said the canal would change the history and the economy of Nicaragua, one of Latin America's poorest countries.
"With this great canal, Nicaragua expects to move 5% of the world's commerce that moves by sea, which will bring great economic benefits and double the GDP (gross domestic product),'' said Mr Halleslevens. 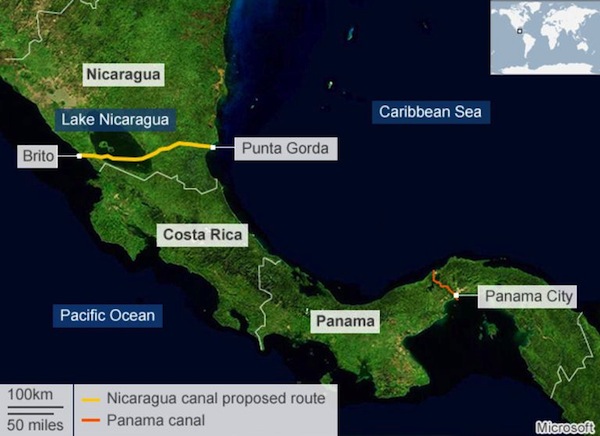 Analysis: Arturo Wallace, BBC News, Nicaragua
There is a clear sense of expectation here, where the construction of a man made passage between the Pacific and Atlantic oceans designed to dwarf the Panama Canal has officially begun.

But there is also tension: over the past few weeks protests against the canal have increased.

And the authorities' decision to hold the main groundbreaking ceremony in Managua, some 120km away from where the waterway is to built, won't help convince the many sceptics who still doubt the project's viability.

The government claims that the project, awarded to a Hong Kong based international consortium, will finally lift the Western hemisphere's second poorest country out of poverty.

But many fear environmental damage may outweigh the economic benefit, or oppose the extremely generous terms offered to the Chinese investors. Those who live on the projected route simply don't want to lose their land and livelihoods.

HKND says it expects the project to be finished within five years and operational by 2020, and to cost about $50bn (£32bn).

The project is to include two ports, an airport, a resort and an economic zone for electricity and other companies.

But some have questioned the canal's financial soundness and allege that Wang Jing lacks experience in developing or financing big infrastructure projects.

Opponents are also concerned about the impact construction may have on Lake Nicaragua and on poor communities in the area.

The route announced in July would pass through the lake, an important source of fresh water.

Environmentalists have warned of the risks of damming rivers and moving large amounts of soil. Communities along the route have staged protests.