Floating arsenals: The boats full of guns for hire against pirates

The MNG Resolution may not immediately catch the eye but it is one of many floating arsenals, moored in the Gulf of Oman. The shipping container it is carrying is full of weapons, to be used by private security firms protecting ships from pirates. But as BBC Africa editor Mary Harper reports, these maritime armouries could be a security risk.

The explosion of piracy off the coast of Somalia, which reached its peak between 2008 and 2010, led to a similar explosion in the maritime security industry.
International naval patrols struggled to cope with the vast ocean area in which the pirates operated.

So, private companies, many of them British, stepped in to fill the gap by providing armed guards for merchant vessels. Somali piracy has reduced dramatically as a result.

It's not the Hilton
But how to arm the private security guards, and how to store the weapons when they are not in use? 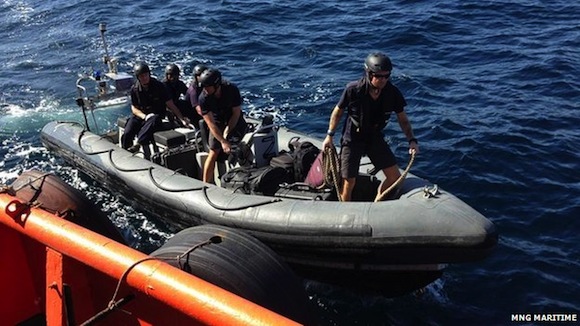 Weapons must be transported to merchant ships

Initially, most weapons were stored in state-run, land-based armouries. But governments, such as that of Sri Lanka, became increasingly uneasy about having such large quantities of arms, ammunition, body armour, night-vision goggles and other military equipment on their territory.

And so the floating armouries were born. Tugs, patrol boats, de-mining craft and other vessels have been converted by private companies into floating arms stores.

Most are based in international waters around the edges of the Indian Ocean.

Some are based at either end of the so-called High Risk Area of the Indian Ocean so guards can easily collect and drop off their arms.

Private maritime security companies can, for a fee, keep their weapons on board, ready to be collected and transferred onto merchant vessels when required. Some floating armouries also offer weapons for hire.

"It's not the Hilton," said Mark Gray, a director of the British company MNG Maritime, who has a floating armoury in the Gulf of Oman.

"As well as storing their weapons, we provide hotel services for security guards who are between jobs. We have bunk beds in cabins, the kind of accommodation they were used to during their military careers. Plus two chefs, a gym on deck and the ever essential WiFi," he told the BBC.

It is difficult to obtain information about exactly how many floating armouries there are, how many weapons they store, and where the arms end up.

The UK government said in September 2014 it had granted licences for UK-registered security companies to use 31 floating armouries.

'No control'
But as this only refers to facilities used by UK companies, the true number is probably higher.

Concern has been expressed about the lack of transparency, regulation and oversight of floating armouries.

A new report commissioned from the Omega Research Foundation by the UK-based Remote Control Project, a body which examines the changing nature of warfare, has called for swift, co-ordinated international action.

Private maritime security firms use floating armouries in the Red Sea and off Fujairah in the United Arab Emirates so that commercial ships transiting the Gulf of Aden can embark and disembark armed security teams without incurring an expensive detour off their track.

For the ship owner, this is reliable and efficient, saving time and fuel.

From the perspective of the individual nation states sitting on the route that the vessels are following, the position of the armouries in international waters reduces the risk of storing so many weapons in one location.

Regulation of the security industry and armoury providers is important so that governments have the necessary reassurance that the weapons are accounted for and are being kept securely when stored in the vessels.

For companies like MAST Ltd, all our weapons are registered and licensed with UK authorities. The level of regulation that the UK government mandates ensures that at any time they can be confident the weapons are secure, and that the whereabouts of the weapons are known.

"Floating armouries with large ranges of weapons are operating without any kind of international agreement or control," says Paul Rogers of Bradford University, who is on the steering group of the project.

"The weapons could get into the wrong hands, and nobody would know, because there is often no inventory of what arms, ammunition and other equipment are on board."

'Detained'
As the armouries are moored in waters close to unstable states, such as Somalia and Yemen, there is a fear that pirates or al-Qaeda-linked groups could seize the weapons, hijack the vessels or blow them up.

Mark Gray of MNG Maritime insists that his floating armoury is properly secured and guarded.

"We have a licence from the UK government, which imposes strict controls. The weapons are overseen by our fully qualified ex-British military Class One armourer. We have sufficient armed personnel on board to fight off a swarming attack by terrorists," he says.

There have already been cases of floating armouries being detained by the authorities in India and the United Arab Emirates after reportedly straying into their territorial waters.

In a document submitted on 19 August 2014, India said it stood "exposed and seriously threatened due to the presence of largely unregulated floating armouries with large amounts of undeclared weapons and ammunition".

The IMO's Maritime Safety Committee said that while it was "sympathetic to India's concerns" it "noted different views expressed by Member States on the legal implications of the proposals" and invited others to submit proposals for discussion in June 2015.

It says 12 of the vessels used as armouries to store weapons licensed by the UK are flagged to blacklisted states, such as Mongolia, the Comoros and Sierra Leone.

These countries, it says, do not have proper safety and security regulations.

'Grab a vessel'
The UK government should immediately revoke permission for UK companies to store weapons on armouries registered to "black flag" states, the report says.

"There is nothing to stop any private vessel being turned into an armoury in international waters," it adds.

"If the flag state is a country with limited (or no) controls over the storing and transfer of military equipment, then such vessels may operate with no oversight whatsoever."

UK maritime lawyer Stephen Askins argues that too much regulation could push up costs and put security companies out of business.

"The status quo is working at the moment. There have been great improvements since the early days when anyone could just grab a vessel, an old tug or yacht, and store weapons in rooms that were not robust," he says.

There is a delicate balance to play in this new privatised world of maritime security. If stringent regulation makes it impossible for the more reputable companies to stay in business, it is possible the industry will go underground.

Maritime experts say some less responsible companies provide their guards with cheap weapons, which are thrown overboard once the job is completed.

But, as the Remote Control Project says, without more transparency and proper international oversight, the risks are significant, especially if the weapons on the floating armouries fall into the wrong hands.