It has been dwarfing Sydney's Garden Island naval base for several weeks, and now the largest ship ever built for the Australian Navy is ready to be welcomed into the fleet.

The NUSHIP Canberra, a Landing Helicopter Dock capable of handling combat situations and humanitarian emergencies, boasts 1.3 acres of hangar space and a flight deck eight storeys above the water.

Its 230-metre hull was built in Spain in 2008 before being taken to Williamstown, in Victoria, for the fit-out.

It will be renamed HMAS Canberra after a formal commissioning ceremony on Friday. 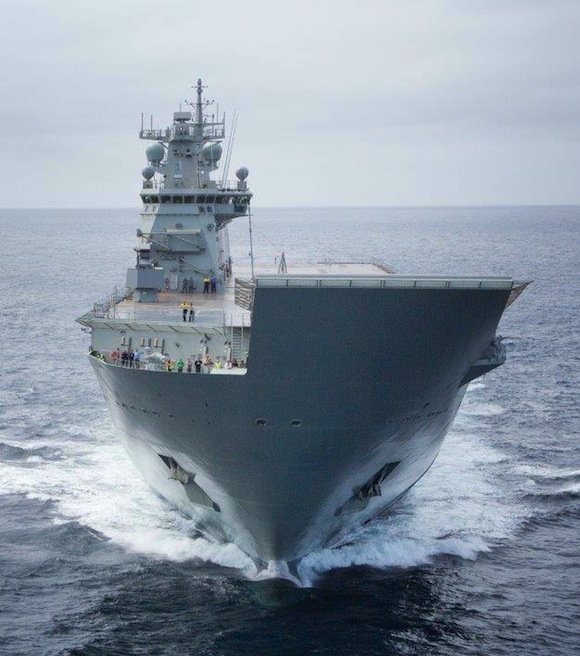 "A lot of the capabilities that are inherent in this ship, we've always had," Commanding Officer Captain Jonathan Sadleir said. "It's the scale that we can now bring to the party, and the alacrity with which we can make things happen."

The Canberra's combined electrical output is the equivalent of 60 Formula One racing cars.

Six helicopters can take off from the deck at any one time. 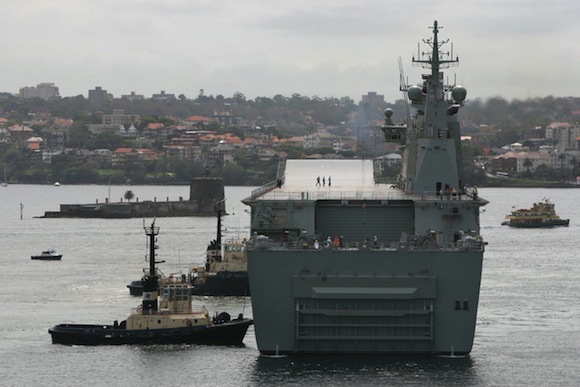 The ship's Amphibious Operations Officer, Major Matthew Singers, said it represented "one of the largest capabilities that's in the Southern Hemisphere". "It can provide humanitarian aid and disaster relief, and it's been likened to being the Swiss army knife of the ADF's force projection and combat power."

Despite its size, the ship has a crew of just 400, compared to more than 1,000 on some of its predecessors.

A sister ship, the Adelaide, is still under construction in Victoria.

Together, the two ships cost more than $2 billion, but the Navy said they would contribute to the defence of Australia and its interests.

"The spectrum that we're operating towards is to have the capability to provide disaster relief, all the way through to being able to support regional and international partners in the broader spectrum of what navies do, which is either save or protect people," Captain Sadleir said.

HMAS Canberra will stay in its home port in Sydney until it receives its first assignment.