A shipwreck uncovered beneath the icy wastes of northern Canada has been identified as long-lost HMS Erebus.

The Victorian-era vessel became part of nautical folklore after it vanished in the mid-19th Century.

Its captain, Sir John Franklin, had been searching for the fabled Northwest Passage.

"It is in astonishing condition,'' said search team member John Geiger, president of the Royal Canadian Geographical Society. "We're over the moon."

The ship set sail from England in 1845 under Sir John's command.

He was accompanied by a second ship, HMS Terror, captained by Francis Crozier. 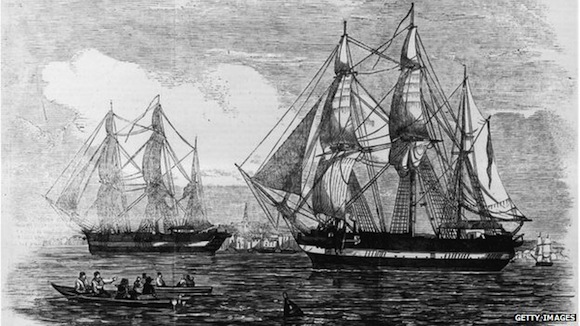 Alongside Sir John were 128 officers, all of them aiming to find the elusive sea route linking the Atlantic to the Pacific via the Arctic seas off northern Canada.

The two vessels were last seen in the summer of that year bypassing whaling boats in Baffin Bay, off the coast of Greenland.

But soon afterwards, the ships vanished.

Inuit hunters told tales of starving white men who had been seen in the freezing wilderness over the following months and years.

Historians speculated that the ships had become trapped in the vast ice floes of the Canadian Arctic.

But until Thursday the exact fate of HMS Erebus had not been known.

The ship was discovered after the Canadian government ploughed millions of pounds into an extensive search operation.

Canadian Prime Minister Stephen Harper even participated in the search himself, such was his determination to resolve the mystery.

HMS Terror has still not been discovered.

Canada has been attempting to assert sovereignty over the Northwest Passage in recent years, claiming the area as its own.

However the US government and others say it is international territory.