How do you safely break up an 'old lady'?

What's the best way to dispose of an "old lady"? Should she be dumped on a beach and broken up by rough hands in terrible conditions or should she be taken in a more sedate fashion to a reputable place to be dismantled in an orderly fashion?

The question is being debated in the shipping industry where an "old lady" is the usual term for a vessel which has come to the end of its days.

One of the world's biggest cargo companies has just decided to stop sending its ships to be broken up on Bangladesh's beaches where ultra-cheap labour does the job in tough, dangerous conditions. 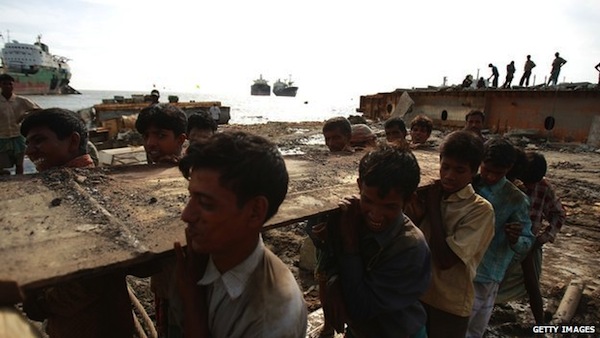 It is back-breaking, dangerous work done by bare-footed people with virtually no medical help for the injured, according to one body campaigning for better conditions in Bangladesh - and one in ten of the workers is under the age of 18.

An average of two workers a month die on the beaches of Chittagong alone, says the group, Young Power in Social Action - and in April this year, four died from carbon monoxide poisoning.

But the difficulty is that sending old vessels to yards with higher standards of safety is expensive - and it may also deprive the Bangladeshi workers of even the pittance they currently earn in wages.

The board of the German company, Hapag-Lloyd, one of the world's biggest operators of container ships, has just had that debate and is switching the disposal of its old ships from Bangladesh to China - where labour standards and costs are higher. Executives balanced the higher cost against the morality of using low-cost workers in appalling conditions and opted for a breaker's yard near the mouth of the Yangtze in China instead.
"We decided we didn't want to use the beaches for scrapping our vessels," says a spokesman.

Boom or bust
It is a dilemma. The switch pushes up the cost by up to $2m (£1.2m) a vessel, depending on how far the ship needs to travel to the final yard and whether it could take a useful cargo on the way - for example, ships sailing to China return empty containers, and that's a lucrative cargo.

When a shipping firm decides a ship is no longer economic, it either sells the vessel to the secondary market - in other words another company - or directly to the breaker's yard. What the buyer of the ship does then depends on the state of the world economy.

In boom years, demand to extend the life of ships is high so fewer get broken up. When demand for shipping is slack, the glut of vessels means they have a relatively higher scrap value, so they usually end up getting beached at high tide in Pakistan, India or Bangladesh where 70% of old ships are broken up.

The switch to higher cost disposal means that the beaches of Bangladesh, particularly at Chittagong, the country's industrial centre on the coast, may get less business. 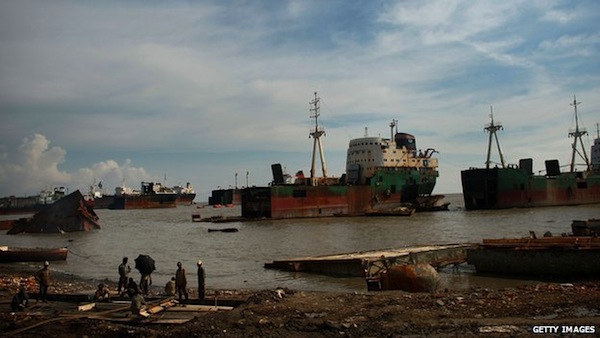 'They get sick and die'
One of the people there who is campaigned for better standards is not mourning the loss of the contracts. Muhammed Ali Shahin told the BBC that the labourers worked in terrible conditions, and the pay for work that kills simply can't be worth it.

"They earn about $4 a day but for the danger of the job, it's nothing because they get sick and they die. They have poison in their bodies because of the pollutants."He thinks the better solution would be for Western companies to invest in proper ship-breaking yards in Bangladesh. "Ship-breaking should be taken off the beach and ships should be pre-cleaned before they arrive here," he says. "Worker rights are violated. They work 12 to 16 hours a day. They aren't provided with safety protection. They dismantle ships without masks and with hammers. They inhale toxic fumes. Workers are dying virtually every day. "Environmental rights are violated. The ships are being cut on the beach and beaches aren't made for this kind of business so there are toxic materials in the ocean."
The real difficulty is the poverty of the economy.

For a rural peasant in the north of Bangladesh, the move south to the coast and jobs like ship-breaking is attractive - low-paid, back-breaking work on a beach is better than even lower paid back-breaking agricultural work.

Decision dilemma
It's not just the desperate labourers in Bangladesh who lose income when the work goes to China, but the whole economy. In the industry, ship-breaking is called re-cycling - the aim is to take everything from a vessel which can be re-used.

Nearly all a ship's structure is made of steel and Bangladesh is dependent on this as a source of steel for its domestic industry.

This obviously presents a dilemma for Bangladesh - higher labour standards may mean higher costs and so less business. The dilemma for the companies is different. Should they always go for the lowest costs, as some share-holders might expect?

Hapag-Lloyd and also Maersk before it, has decided that higher labour and environmental standards justify a bigger hit to its bottom line. Firms are also aware that using ultra-cheap labour can mean bad publicity and "reputational damage" for a company.

The industry thinks that imposing internationally acceptable standards is the way forward, so that a series of conventions have been agreed to stipulate the minimum standards acceptable, and so remove the advantage some companies have by using the cheapest labour.

Human cost
But whatever the economics of ship-breaking on the beaches of Bangladesh, you can't doubt the human cost.

The pressure group, Shipbreaking Platform, which campaigns for better standards cites the case of 16-year-old Khorshed Alam who was crushed to death when a metal plate fell on him.

He had just left school to support his family even though his pay was less than $3 for a 12-hour day.

Now all his family has is the grief - and the memory of a teenager doing a man's job in appalling conditions.