Years ago a former shipmate in command of a big channel ferry said that what would make his life inestimably easier would be if naval architects could incorporate a wide belt of rubber around the bows of his ship. This he said would enable him to approach the berth with much more confidence and speed, instead of worrying about the consequences should the pitch controls stick or there be a small miscalculation of his distance off. Ideally he would have opted for a sort of supersize Rigid Inflatable structure, although he recognised the limitations this might have for a drive-through ferry. It is just that his thick steel belting was somewhat unyielding for a ship that he was berthing several times a day.

My friend is now retired but I expect he would be enthusiastic about a brand new capesize bulk carrier which has emerged from the Saijo Shipyard of Imabari Shipbuilding Co. in Japan which is protected in its most vulnerable parts by “highly ductile steel plate”. Ordered to the account of MOL, this new vessel incorporates some 3000 tonnes of Nippon Steel & Sumitomo Metal Corp’s NSafe(R)-Hull steel, in a broad band around the cargo holds and bunker tanks. 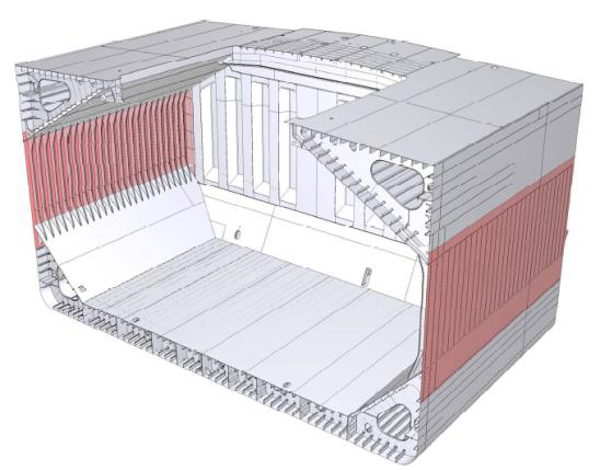 This, it is claimed, will ensure “superior collision safety”, with the ship’s sides less likely to crack in the event of an untoward impact from a collision. Improved “puncture resistance” will make such a ship far less likely to suffer a catastrophic loss of buoyancy in the event of such an incident, something that has happened in the past with ore-laden bulk carriers, even of the largest size. The ductile belt extends the full length of the cargo holds, covers the bunker tanks peripheries and consists of the single skin side shell, extending above and below the levels of the topside and lower wing tanks.

MOL, which has announced its new baby, says that it will absorb side impact to the hull three times more effectively than conventional steel plate