Probe into how ship hit bridge

The cargo ship AAL Fremantle and the car carrier Grand Pioneer were being unloaded in Fremantle harbour when both swung away from their North Quay berths about 10pm. 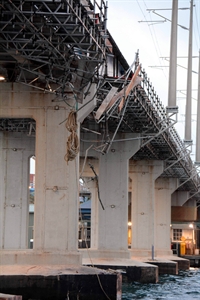 The 149m-long AAL Fremantle collided with a bunker barge before making contact with the Fremantle rail bridge, causing damage to scaffolding and an overhead power line.

The 200m-long Grand Pioneer did not affect any other vessels or infrastructure.

The Australian Transport Safety Bureau has been made aware of the incident.

Fremantle Ports external affairs manager Ainslie de Vos was “surprised” a ship the size of the AAL Fremantle was able to reach the rail bridge because there is a protective shoal on the bridge’s harbour side.

“That is obviously the subject of the investigation that is now under way,” Ms de Vos said.

Tug crews worked through the night to rein in both ships and the AAL Fremantle has now been moved to Victoria Quay for inspection.

Initial assessments showed no exterior damage to either ship or the Parmelia 1.

“The 60 knot winds … were very sudden,” she said. “There was little warning. “It was an extreme storm situation which came very suddenly.