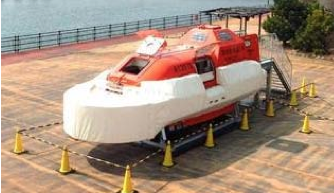 IHI will set up production lines at its core domestic plants capable of turning out 300 boats a year. It targets annual sales of about 5 billion yen ($47.4 million). It will make two types -- one that can hold 25 people and one that can accommodate 50. The company completed a 25-person prototype in spring 2013. The vessel is made of lightweight reinforced plastic and features bumpers made of foam resin on areas most likely to be hit by debris. The boat is designed to keep occupants safe even if it slams into a wall at a speed of nearly 40kph.

The boat will be equipped with GPS technology so as to be easily located. Clients will have the option of adding a motor. IHI will this year build a line at its factory in Aioi, Hyogo Prefecture, to manufacture 25-person lifeboats. It has already received an order from a food company in the city of Kochi. The boat is priced at just under 10 million yen. The company will also target sales at other parts of Asia, where lifeboat demand is rising due to frequent flooding caused  by heavy rainfall.