With the largest cruise ships of today now carrying upwards of 8,000 passengers and crew, it is easy to question just how safe these enormous vessels really are. A loss of power or even an engine room fire such as the one experienced by the Carnival Triumph earlier this year is one thing, but what about a Costa Concordia-type event that calls for the rapid evacuation of thousands of passengers at sea?

It’s a tough pill to swallow, but given the enormity of today’s modern cruise ships it is not a question of if such an event can occur, but when.

With that in mind, Danish marine and fire safety equipment-maker VIKING has developed a new type of high-capacity evacuation system that is said to combine the advantages of both lifeboats and liferafts into one hybrid solution for large cruise vessels.

VIKING says that their new patent pending system, called the VIKING LifeCraft™ system, combines all the advantages of modern lifeboats – such as self-propelled maneuverability – with the flexibility, comfort and smaller footprint of today’s liferafts.

The VIKING LifeCraft™ consists of two main elements: The LifeCraft™ itself – a self-propelled inflatable vessel with four engines for a high degree of maneuverability and a low-profile storing and launching unit, either placed on deck or built in, containing up to four LifeCraft™ units with a capacity of 200 persons each, for a total capacity of 800 persons. 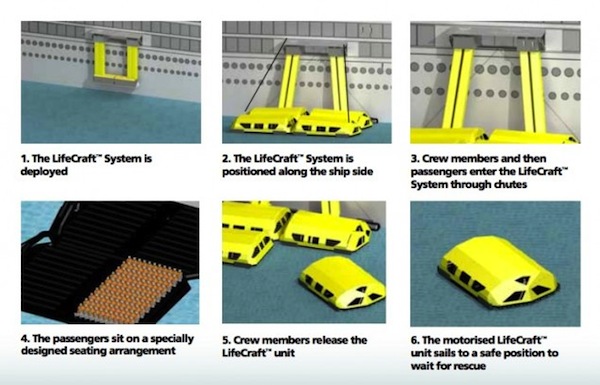 According to VIKING vice president Niels Fraende, this is a product that completely changes the lifeboat versus liferaft discussion, at least when it comes to high-capacity evacuation systems as needed on modern day cruise ships.

“Today’s larger and wider vessels mean that the number of passengers and the variation in trim height and list conditions can be enormous in a distress situation,” says Fraende. “The LifeCraft™ is a hugely flexible evacuation system that can cope with such extremes.”