A digital 3D model has been created showing every piece of timber and iron making up Lord Nelson's flag ship HMS Victory. 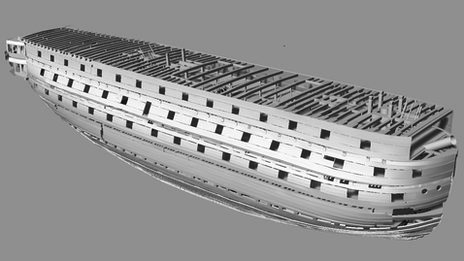 Experts used laser imaging to map the 248-year-old vessel, which is undergoing conservation at its home in Portsmouth's Historic Dockyard.

The technique allows experts to see more clearly how the ship was made and details each of its 80,000 components.

The ship is owned by the National Museum of the Royal Navy.

The model was developed by BAE Systems, and as further restoration is carried out it will be used as a template while a record of the work will be added to it.

Incredibly complex
Victory was Nelson's flagship at the Battle of Trafalgar, beating a combined French and Spanish fleet in 1805.

Nelson was injured during the battle and later died aboard the ship.

Andrew Baines, curator and project director for HMS Victory, said: "At almost 250 years old, HMS Victory's structure is incredibly complex, both in terms of design and the history of repair and conservation."

The structural analysis that follows the laser mapping would "allow us to plan our programme of conservation".